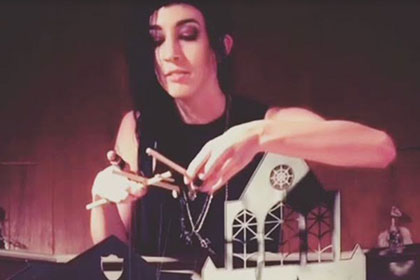 Han exists primarily as the one-human show Handsome Devils Puppets. A self taught sculptor and puppeteer, touring storyteller and songwriter, her creative journey is about much more than creating art, it is a means of self-expression. “I started making puppets when I felt I didn’t have a voice. I sculpted powerful, magical creatures to dance and sing and cry and give me that voice.” In this episode, Han talks about growing up in a strict Catholic household in Kansas and how that shaped her and her art, her background in costume design, her love of murder ballads, her battle with anxiety and how her puppets are her proxy for interacting with the world, how she deals with life’s tragedies through her art and how not revealing her full name and moving to a different city every few years helps her cope and keeps her sane.

Han will be touring the West Coast soon, so check out her website for upcoming performances and follow her on instagram to see her custom puppets which include Merricat Blackwood — the main character from Shirley Jackson’s We Have Always Lived in the Castle, Sylvia Plath, post mortem babies, Frida Kahlo, Wednesday Addams, Vampira and David Bowie.  This episode is a must-listen for creative souls forging their own paths and struggling to cope with life in general. 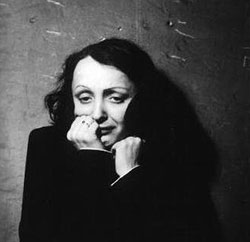 Édith Piaf was one of the most iconic performers of her native country France. She was a singer, songwriter, cabaret performer and film actress noted as France’s national chanteuse and one of the country’s widely known international stars. Piaf’s music was often autobiographical and she specialized in chanson and torch ballads about love, loss and sorrow. Also known as “The Little Sparrow,” Piaf was born in Belleville, on the outskirts of Paris, on December 19, 1915 and she struggled from day one as the daughter of street performers. Her mother, a singer, eventually abandoned both Edith and her father for a solo career. Piaf spent her youth entertaining passers-by, receiving little formal education in the process. An aborted love affair left her with a baby girl at age 17, but little Marcelle died of meningitis at 2 years old. Devastated, Piaf returned to the streets she knew, now performing solo.

Her fortunes finally changed when an impresario, Louis Leplee, mesmerized by what he heard, offered the starving but talented urchin a contract. Piaf grew in status entertaining in elegant cafés and cabarets and became a singing sensation amid the chic French society with her throbbing vocals and raw, emotional power. From 1936 Piaf recorded many albums and eventually became one of the highest paid stars in the world. She was first embroiled in scandal when her mentor, Leplee, was murdered and she was held for questioning. Piaf also took to writing and composing around this time; one of the over 80 songs she wrote included her signature standard, “La vie en rose.” Although she appeared sporadically in films, it was live audiences that sustained her.

Two serious car accidents suffered in 1951 led to a morphine and alcohol addiction that left Piaf’s life skidding out of control despite a potentially happy marriage in 1952 to actor Jacques Pills. She died in poverty at the age of 47, the same age as her equally tortured American counterpart, Judy Garland.